On Thursday, November 2, Scientia hosted their second “Talk Science” event of the semester. Staff members and editors for Scientia were joined by other students in the Jordan Hall of Science Reading Room for research talks given by Professor Bradley Gibson, Ph.D. and student Michael Foley.

Professor Gibson, a Cognition, Brain, and Behavior specialist, spoke about Attention Deficit Hyperactivity Disorder (ADHD). He described the process of diagnosing children with ADHD and explained how this multidimensional process has changed in recent years. 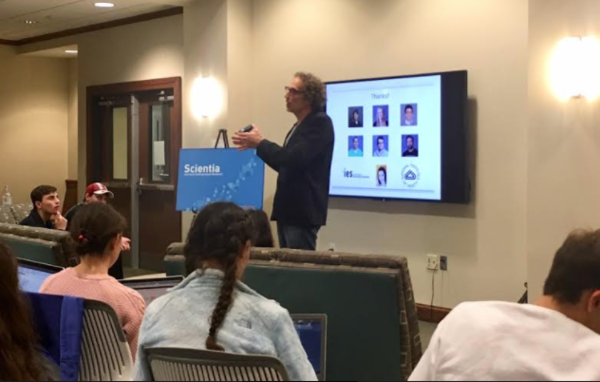 The long-standing nature vs. nurture debate has been no stranger to ADHD researchers. Professor Gibson explained the ways in which both genetics and the environment contribute to phenotypic expression, stating, “The pendulum has swung between these two extremes.”

In the face of concerns about over-diagnosis, Professor Gibson explained that when conducting studies, researchers must be very careful about who meets the criteria for ADHD.  His research primarily focuses on working memory and cognitive treatment that may be available to “exercise” certain parts of the brain. Using the analogy of a video game, Professor Gibson explained how targeting retrieval of information remains a critical area of research. 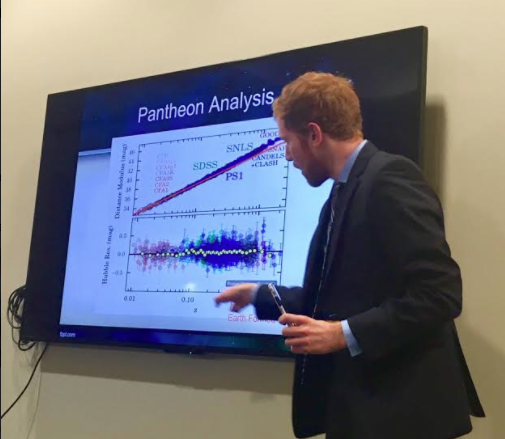 Michael Foley, a senior Physics major and editor for Scientia, shared the summation of his physics research in a talk entitled “Modern Supernova Cosmology.” He explained that while dark energy accounts for approximately 70% of our universe, it still remains to be fully understood. In particular, he described how, while responsible for the accelerating expansion of the universe, the nature of dark energy remains a mystery.

Michael’s research takes a three-pronged approach that includes the Pantheon analysis, the Foundation Supernova Survey, and investigating Type Ia supernovae at near-infrared wavelengths. Setting the scene for his research, Michael described several fundamental concepts, including the concept of redshift, which describes how photons emanating from stars behave when moving away (as they do when the universe expands). Specifically, Michael studies Type Ia supernovae. He explained how these occur in binary systems (two stars which orbit one another in which one of the stars is a white dwarf).

The main focus of Michael's research is the calibration of telescopes that contribute to systematic uncertainties in the measurement of the properties of dark energy. His work on this project has taken him as far as Chile to conduct supplementary observations related to these telescopes.

Both speakers entertained questions from the audience, facilitating participation from student attendees. The final “Talk Science” event of the semester will take place on Thursday, November 30, 2017 from 7-8 pm in the Jordan Hall of Science Reading Room. All are welcome to attend as we hear from Physics Professor Graham Peaslee, Ph.D. and junior Biochemistry major Patrick Cunniff.